Apartments, holiday homes, accommodations near the Opera House in Budapest 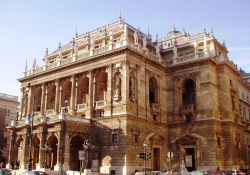 A few minutes walk away from our apartment you can find the Hungarian State Opera House on Andrassy Avenue. The beautiful building is a masterpiece of the famous Hungarian Architect, Miklós Ybl. The Opera House is well worth a visit, even if you are not an opera fan.

The construction of the Budapest Opera House began in 1875, and lasted 9 years, financed by the city of Budapest and Emperor Franz Joseph I.When the Opera House was opened in September 1884, it was considered Europe`s most modern opera house, combining practicality with artistic beauty. The neo-Renaissance building has several elements of baroque, and it is richly decorated by hundreds of sculptures and paintings. Outside you can see the statues of the world`s most famous composers, including Beethoven, Mozart, Verdi, and some of the greatest Hungarian composers, including Franz Liszt und Ferenc Erkel (who was also the first director of the Opera House). 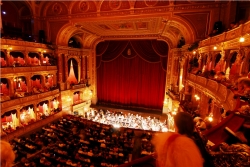 The breathtaking interior of the Opera House reflects elegance and splendour. The impressive double grand staircase and the walls of the entrance hall are covered with marble, and magnificent frescoes and sculptures decorate the interior.

The three-storey, horse-shoe shaped auditorium was the most modern opera house in Europe of the time, and it is still among the best. Measurements done by international engineers in 1970 showed that the Hungarian State Opera House was the 3rd in Europe in terms of acoustics, after the Scala in Milan and the Paris Opera House. The beautiful auditorium has a very rich decoration, dominated by gold and the colour red. A huge hanging chandelier enhances the splendour.

The Opera House is just as splendid today, as it was at its opening. During its renovation from 1980 until 1984 the building regained its original magnificence, and even today, the Hungarian State Opera House is regarded as one of the most beautiful opera houses of the world.

The opera season starts in September each year, and runs until the end of June.