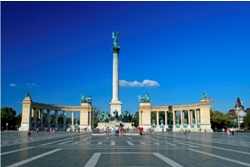 Walking down on Andrássy Avenue towards City Park, you reach Heroes' Square, which is one of the biggest squares of Budapest, and it is definitely the most impressive one.

The Millennium Monument is situated in the centre of Heroes' Square and it provides a great tour of the Hungarian History with its statues. The Monument was built for the 1000th Anniversary of the settling down of the Hungarians in the Carpathian Basin. The construction started in 1896, but was actually finished only in 1929.

In the middle of the square stands the 36 metres high column, with the statue of Archangel Gabriel on top, a symbol of the Roman Catholic Church. At the bottom you can see a group of seven figures, commemorating the seven tribes, which arrived to the Carpathian Basin. Their Leader, Arpad is on the front, he is considered to be the founder of the Hungarian nation. Behind the column there are two semi-circles, each one has seven statues between its columns, representing important individuals of the Hungarian History, including kings and governors.

Heroes' Square is situated between two famous buildings, the Museum of fine Arts and the Palace of Art.

Heroes' Square near our apartment on Andrassy Avenue

You can walk to Heroes' Square from our apartment in around 30 minutes. Alternatively, you can take the underground (Metro line 1) that stops in front of our building. Get off at the station called Heroes' square (6th stop).