Sitting quietly in the center of Pest and nestling itself between apartment buildings and shops is the mightily impressive architectural splendor of St Stephen's Basilica. At a height of 96m it equals its mighty twin of the Parliament dome although both are vastly different in terms of views and design; those that are interested may care to note that the height of each dome relates to the arrival of the Magyars into Hungary in 896 AD.
There are two views of the Basilica, one not so impressive in its approach from Bajcsy-Zilinszky and the other a breath taking walk up from the Danube along Zrinyi ut that gives a fascinating effect as the church grows before your eyes the closer you get to the large open square in front of the steps. Patience is definitely required to capture the perfect photograph as this is one of the major tourist sites the city has to offer- if you have a spare minute stop and take in not only the awe of this building but also the vast number of different languages being spoken around you. 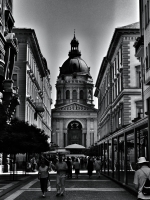 The interior of the Basilica is something to behold and be sure to spend time looking at the gorgeous stained glass windows; which in the midday sun can cast some amazing coloured shadows across an already impressive structure.

Whilst visiting be sure to stop by the mummified hand of St Stephen (Hungary's holiest relic) although if you happen to be in Budapest on the National Day of August 20th you can follow its procession through the streets.

Another hidden gem of the Basilica is the panorama tower which offers a jaw dropping view across Budapest for 360º. 302 steps will take you past the belfry and out into the dizzying heights although there is an elevator available for those who may require it, be sure to bring your camera and capture some great images as the city continues below you in miniature (by Phil Watkins)

Modern, luxury holiday apartments in the centre of Budapest near St Stephen's Basilca, Andrassy avenue and the Opera House.

Our Basilica Panorama Apartment Budapest is luxury holiday rental with a balcony from where you have an amzing view of St Stephen's Basilica abd the square. More information here: http://www.apartmentsbudapest.info/basilicapanoramaapartment